In my previous two posts, I described how to use the Gitlab CI as well as how to build/push your docker image with Gitlab CI. In the next step, we want to integrate our newly generated docker image on AWS. In this step, we use AWS Elastic Container Service (ECR).

Now, we want to use these images in AWS. The normal step would be that we login to our Gitlab registry with:

In the previous posts, we used the build token of gitlab for the authentication but this key expires after some time. Therefore, we can not use them to pull images (because maybe after some time, the pull request won’t work anymore). So you can simply use your normal user gitlab credentials. I would really recommend to create an additional user because otherwise the user could have to much permissions, which is a security leak.
To pass the login credentials to your EC2 instances, you have to modify your Container EC2 Instances (instructions see here: http://docs.aws.amazon.com/AmazonECS/latest/developerguide/private-auth.html). After that, you are able to pull from your private gitlab docker repository.

In the end, your AWS Task Definition could look in the end like this: 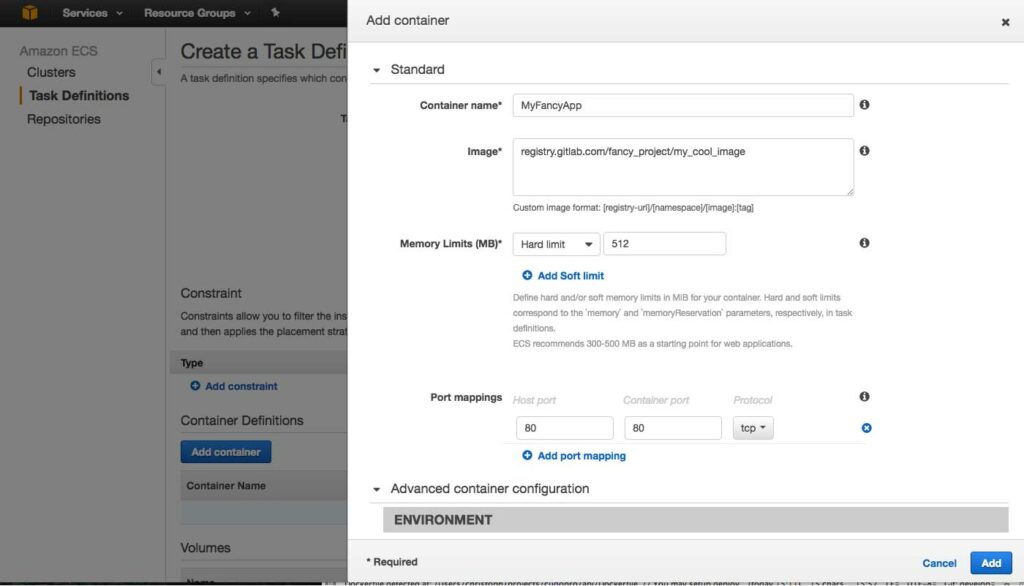 In the end, you will see that the manual steps to add your docker registry credentials to the AWS EC2 instance is quite hard and uncomfortable. Therefore, it is quite easier to use the AWS Elastic Container Registry (ECR) to store your repositories. The advantage is that you do not need to pass any docker credentials because pull requests are always accepted within the AWS network. The usage is also quite easy:

Backup: Push docker images from Gitlab CI to AWS ECR for using it in AWS ECS

In this step, I will explain you how to push images to AWS ECR. The steps are quite easy. First of all, create a IAM service account with programmatic access. In this step you should assign the AmazonEC2ContainerRegistryFullAccess policy to the account. Then store the access key and the access secret key as environment variables (Settings > CI/CD Pipelines > Secret variables):

This code stores the AWS credentials in the docker container to use them later on for the deployment with the python AWS cli. Next, you have to include the script in your gitlab-ci.yaml. In the end, this could look like this:

Please note, that you have to replace the amazonaws.com url with your own AWS ECR registry url. If you do not have still created a AWS ECR repository, then please do this. In a repository, all your docker image versions are stored. A tutorial how to create such a repository can be found here: http://docs.aws.amazon.com/AmazonECR/latest/userguide/repository-create.html
After that, the repository URL can be inserted in the updated gitlab-ci.yaml file.

If you run now the pipeline, your image will be pushed to AWS ECR and can be used in the ECS instances.

The last and easiest step is now to use the on AWS ECR stored images. This can be done similar to the previous step. Just replace the gitlab repository url with the AWS ECR one, like this: 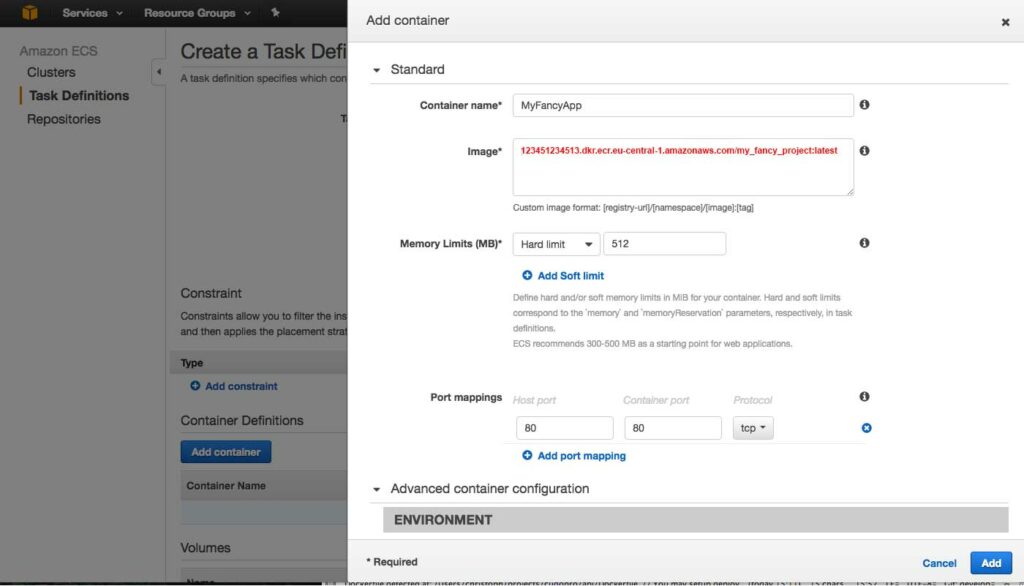 That’s all. Hope you enjoyed my tutorials and if something is unclear, feel free to post a comment or send me a message.